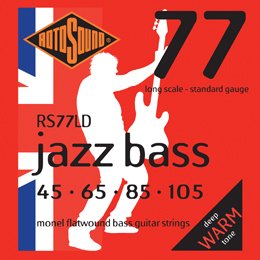 The ‘Monel ‘flatwound bass string that’s been awarded many accolades since its inception.

The RS77 Jazz Bass set has found favour with so many of the worlds top leading artists including the likes of Oasis, Steve Harris, Roger Waters and Herbie Flowers.

The build spec remains a close kept secret but the Monel 400 tape used in the strings making brings out the true character of these strings over the competition who are happy to use the much less costly flattened stainless steel.

These strings are still manufactured the ‘old fashioned way’ by hand on machines that James How built at the end of the 1960’s.