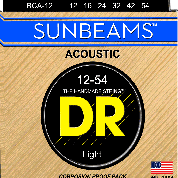 Sunbeam strings are handwound upon round cores which give a terrific result..wonderful sustain..remarkable sustain. The tone does not seem to decay as do other phosphor bronze strings, which we think of as decaying in a curve. The Sunbeam phosphor seems to sustain in a straight line, until the sound "falls off". The Sunbeam phosphor strings are also musically bright and rich sounding. Being round core based, they are also very flexible, more so than any other string we have played.